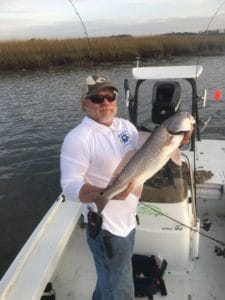 Slipped out yesterday to do a little prefishing for some upcoming trips. We ran the 18ft Action Craft to a small creek that had reportedly been doing well, We were not disappointed. Water temps were in the low 50s and the tide was near the end of the falling. I was concerned that there was not enough current to position the fish to make them susceptible to a artificial presentation. To my surprise though that was not the case. These fish were active and willing to chase a bait. We fished with small grubs on a 1/8 Trouteye Jig head and found that even with the slight current, a presentation of a up stream cast with a slow roll back to the boat produced a fish nearly every cast. Red fish were staged around dock pilings and the Trout were on the corners in deeper holes. Even managed couple keeper Flounder off the nearly exposed sand bars.

Having all the info we needed out of this little creek and due to the tide turn we headed to the large flats and sight fished for winter schools of Redfish. Within just a few minutes of bank cruising we again were back into fish.The Reds were doing exactly what we assumed for this time of year and we managed to locate several schools in 2 ft of water. The winter pattern from last year appears to be in place again this year with optimal water temps, low food supply and clear water. These conditions set up the perfect storm to catch some of the highest numbers and best quality of the year. Forget about waiting until it “warms” up to book your trip. When it comes to fishing, this is as hot as it gets!