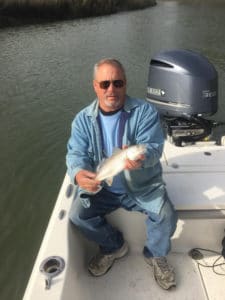 Winter time in SC has arrived in a big way! January so far has blown in brutally cold weather with the longest stretch of snow on the ground that I have ever seen in my 40+ years in the Lowcountry. Water temps have been reported as low as 39 degrees with some still water areas actually forming surface ice. With all of this, it leaves the question of how did our fish handle the extreme water temps ?

Well, I am glad to say that the initial reports have been positive. A fish kill has taken place. Spotted Sea Trout are simply not tolerant of the severe cold water and their mortality rate increases significantly when they are exposed to water below 41°F. That being said, most of the reports have been referencing fish that were isolated and not able to seek deeper water fast enough to escape the cold. Redfish also seemed to have suffered some, although they are pretty tough fish and any mortality is scattered at best.

Today we took an underwater camera out and witnessed for ourselves that the Sheepshead and other fish are alive and well. We managed to land a few sheeps as well as some small reds. Our water temps were still in the high 40’s but climbing and these fish were active. It appears the fishery in SC took the cold beating with only a small amount of damage. This is great news for the upcoming Spring season. I will be fishing several more times this month and will provide updates. If your looking to fish this spring, do not let rumors change your mind. I look for a great spring season from all of our inshore species!