If there is one month out of the year that I would have to judge as the most challenging and potentially the most rewarding its March. March is a finicky month. Weather patterns are more unstable than any other time of year. Fish patterns change not only with the tide but also with the strong cold fronts that continuously drop warming water temps. Fish are confused. One day they are moving shallow and are aggressive while the next day water temps drop drastically, often overnight and push them back into lethargic mode. It’s frustrating for all fisherman and most give up, waiting until April when things stabilize. This however is their mistake. 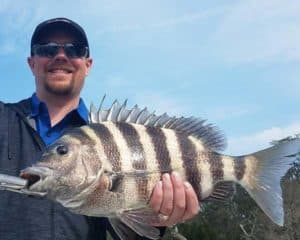 There are several key factors in March that if you play your cards right can really make for a great day of fishing. First there is still nothing for fish to eat. Most of the food chain either is still living in warmer southern waters or deep water. This makes the fish who spend their lives in generally the same areas year-round greedy when an opportunity of food presents itself leading to a fantastic bite. Second is that these fish are typically living in tight groups. They are in the same places you caught a lot of them in the fall. Its just now there schooled close together. This tends to lead a lot of anglers to believe that there are no fish in these traditional spots this time of year. They are still there, they are just not scattered around the area chasing. Put a bait close enough to them though and its surprising how many quality fish can be caught out of a very small patch of water. Third is the fact that the fish around tend to be very good quality. As mentioned before although the water is warming for the most part pesky bait stealers such as Pen fish have not moved back into the estuary yet and good quality baits don’t get stolen as soon as they are tossed out. Also, when tossing artificials, you don’t get the “pecks” from these fish. If you get a bite, it’s usually a good fish. 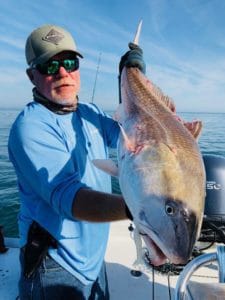 Good fish to target in the month of March are Sheepshead and Redfish. They stay here all year and tend to at some point in the tide cycle eat very well. Sheeps are the better bet as they don’t seem to be as affected by the cold fronts as drastically as Redfish. Trout are also catchable after a few days warming and if you have some live shrimp on long cork leaders, odds are you will catch them pretty good. My second go to bait for Trout during the early spring is Mud Minnows. Often considered bottom of the barrel bait by some fisherman they can out fish shrimp 3 to 1 in the early spring as that is what’s naturally available to Trout this time of year and “matching the hatch” is always a good bet.

LCL had a great March of fishing as shown by our client’s pics. A lot of that had to do with a determination not to give up. Keeping your head down and your confidence high allows you to stay in the game and try different tactics. This is usually rewarded with some great fishing as our clients had by braving the March weather madness!